Captain rank, woo!  More on that in a bit.
So now that I've mastered GEO, I figured I would start working on WHM.  You know, get some of the slow job points out of the way.  Then Braego and I got to discussing Vagary clears and how we may be able to clear some zones, but there are mechanics in other zones that we need specific jobs for (like SCH SCs, for instance).  Since SCH only needs 550 JPs to reduce the strategem recasts, I figured I could probably get that done quickly enough to be able to fill that role.  So, I'm now working on SCH.

I spent a lot of time (and gil) getting all of the SCH JSE reforged and upgraded to 119.  I ended up running out of the necessary Rem's Tales that I needed to fully reforge all my gear, so I did a few high-tier mission battlefields to get the ones that I was missing.  Not sure that I'll use all of the pieces, but at least they're all done.  I've been trying to work on my equip sets and macros, but I'm really having a hard time figuring out how to make it all work.  I feel like I should be at a really good starting point, with all of the crossover gear that I have from BLM/RDM/GEO.

Braego wanted an iLVL cure potency staff for WHM, so we went out to kill the UNM Arke in Sauromogue Champaign a few times.  We went COR + MNK and had a pretty good time.  The kills were pretty quick and low-risk.  He was definitely putting out better numbers damage-wise with his new ambuscade gear.  Eventually he got the NQ staff and between the two of us, had enough Arke Wings to upgrade it to +1.  That will definitely help us out as we attempt to tackle higher level content.

Wack and I did a few Omen runs.  I'm trying to collect RDM cards so that I can +3 the body, he was after NIN cards to make his legs +2.  The first run we actually timed out in the first room.  We killed the last mob with seconds to spare but couldn't make it to the next floor in time.  The 2nd run went much better and we had 1 Transcended Pixie left to kill when we ran out of time.  Wack got the cards he needed but discovered he didn't have enough beads (he spent them all on Eschalixir +2's to augment his new +1 Souveran pieces).  So, we killed Met a few times for beads.  We got the beads he needed to upgrade his armor AND got the real drop he was after: Amar Cluster.  I decided to upgrade my RDM gloves to +2 for an extra 2% enhancing magic duration. We also did a few Tenzen runs in an attempt to get a Ginsen for him, but unfortunately, that drop still eludes him.


Braego and I did a few more Ambuscades.  Turns out with his new ambuscade armor that we were able to duo the V2 scorpion NM on Difficult.  Now he's starting to collect +1 Mummu pieces.  I was able to get the last two metals that I needed to upgrade my Jhakri robe to +2.  I think I'll work on the Meghanada Gloves +2 next for the extra WSD.
There were 3 Ilrusi Atoll assaults standing between me and Captain rank, so I figured I would make an attempt to get them done.  According to the assault solo guide, these ones are very difficult to do solo (Apkallu Seizure, Lost and Found, Desperately Seeking Cephalopods).  While the were difficult, being on COR really helped me get them done.  Having access to Tactician's and Bolter's rolls meant that I could quickly move around the map and that I had TP to WS whenever I encountered a mob.  I ended up going 1/1 on all 3 and was rewarded with Captain rank!  I can now use the Runic Portal and get into Alzadaal Undersea Ruins for free (no longer need to carry around Imperial Mythril pieces to pay the guards) and get an extra Assault Permit.  I immediately turned my werebuster into Naja Salaheem to officially start my mythic quest.  There is still a long road ahead, but I'm officially on my way!
I was curious to see what was needed to get to the 3 beast kings and was pretty happy to see that I already had 2 of the 3 keys to get to Gulool Ja Ja.  I headed off to Mamook to get the last key (which I got on the first kill) and try to find the NM.  Unfortunately, it was pretty late and I'm not at all familiar with Mamook, so I wasn't able to actually find him and logged off.

I hope to have some progress to report next time.

After checking the gobbie box on all of my mules (got a ~4m item to sell), I did a quick Yorcia WKR to get the last KI I needed to buy another Animikki Bullet.  I think I'll get a few extra to keep on mules just in case I accidentally shoot it again.

When I was done with that I saw a CP PT shout for a GEO.  It was still pretty early, so I joined.  I figured even if it was a crappy party, I only needed ~65 JPs to get to master.  Since people are allowed to use JPs to upgrade/augment REMA and Dynamis [D] weapons/accessories, we got a REMA Master COR.  Pretty sure we had RUN, COR, SCH, BLM, SMN, GEO.  The BLM actually pulled most of the night, which was pretty nice as I got to sit tight and just let my bubbles do their thing.  The SCH would stun-ga, the BLM would sleepga and breakga, and I would just bind/grav/etc to tag mobs.  I don't know what the SMN was doing because most of the time the mob was dead after the SC. Occassionally the BLM would get a MB in.  In any case, it was very fun and productive.  The PT lasted a little over an hour and I walked out with 185 JPs.  Enough to get master and 110 to spare.  Feels good, man.

After, Braego and I hit up AMAN Trove a few times.  First time, I got opened 5 boxes (a mix of noises and thuds) and then decided I shouldn't press my luck.  I got a couple of +1 alluvion skirmish stone pouches, a couple of sellable drops (Pil's Tuille, Macuil Plating).  He went and had similar luck.  He got 4 or 5 boxes of noises/thuds, then exited.  He got a alluvion skrimish stone +1 pouch, a fern pouch, and the Naga Hakama to use on his MNK.  We tried again, but both ended up getting the mimic.  He was ~5 boxes in before he got the mimic.  I had checked 7 boxes before I got mine.  Maybe I need to change my strategy?  I mean, I'm really only interested in the Omen/Reisenjima drops.  As far as I know, they only come from loud thuds.  My strategy has been to open until I get a loud thud and then exit.  Most of the drops that come from the regular thud or noise tend to be from high-tier battlefields or escha zones.  I've already collected most of the gear from those zones that I'm interested in.  But it is still really hard to walk away from 7+ spoils.  I've got a few more vouchers that I can get on Truece, and still have 2 or 3 orbs that I can use on Trutaru.  Hopefully I won't have to make any decisions about if I should leave or not because I'll actually see a loud thud!

This month, the login campaign has Empy boss drops for 1000 login points.  I should be able to buy the last of the Apedemak Horns that I need for Daurdabla.  I haven't started on the colorless souls/iron plates yet, but that should go pretty quick.  I regret not participating more in last month's VW campaign.  I could really use the heavy metal plates; I'll need 1500 of them and 60 riftcinders to become a 4-song BRD.  I will have a few login points left over, maybe I'll look into collecting items for another empy (Almace or Ukon?). 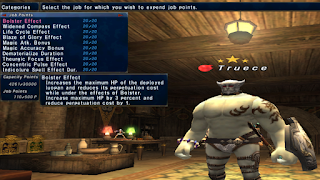 Posted by Truece at 9:48 AM No comments:

SE introduced A.M.A.N. Trove with the August version update.  Braego and I checked it out and managed to get a few high-tier battlefield drops, a couple Reisenjima pieces, and an Omen body (Udug Jacket).  I think we're both looking forward to doing it again when the Monthly RoE objectives reset.

I picked up the Malformed Gun KI to officially start on Fomalhaut.  I was torn between making Death Penalty or Yagrush as my first mythic.  Since I was already (nearly) capped on beads, I decided to do the Aeonic gun so that I didn't have to worry about upgrading Death Penalty to 119.  I also am almost done collecting Apedemak horns for Daurdabla.  So, I'll work toward a 75 Yagrush, 99 Daurdabla, and a 119 Fomalhaut.

I'm just 3 assaults away from Captain rank.  Looking forward to getting started on Assaults again and the slow collection of titles/kills/Alexandrite that are needed to complete the Yagrush.  I think I have 2 boss kills already, but I've never set foot in Einherjar, so I've got a long road ahead of me there.  I'm above 130k Nyzul Isle tokens, so that part is almost done.  Unfortunately, I've never done zeni NMs and I've only got ~100 of the 30k alex that I need.  I'll focus more on collecting alex once I get to the point where the NPC will hold onto them for me.

I got in a few nice CP PTs and am currently just 63 JP from master GEO.  Looking forward to finishing that off so that I can start working on WHM. Or BRD.  Part of me doesn't want to do anything on either job until I have the awesome gear, but the other part of me doesn't want to wait, either!  Either piece will make my job so much easier (and desireable by PTs).  I just don't want to have to wait to complete either, as they will both take a very long time.

In other news, Wack is back! I spent some time doing Ambuscade with him and Braego.  It was fun!  Unfortunately, his work schedule doesn't overlap very well with Braego or my schedules.  We should be able to get together at least once/week, during the afternoon on the weekend.

I'll leave you with my summer lockstyle.  Until next time! 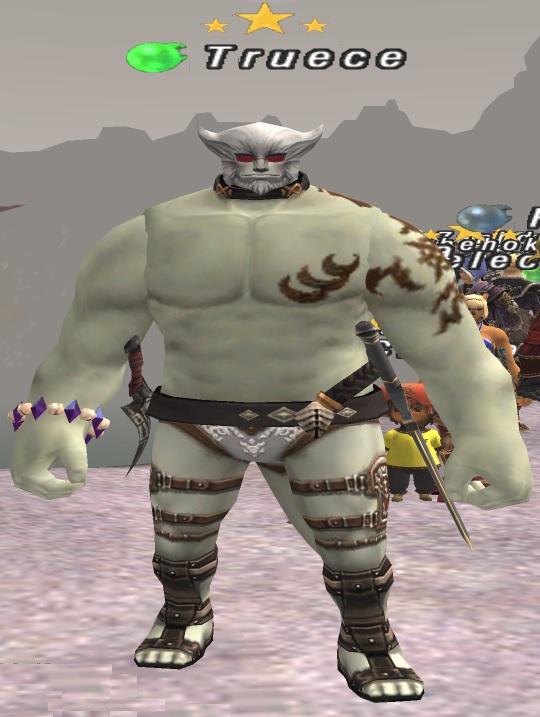 Posted by Truece at 3:34 PM No comments:

Currently working on Yagrush and Fomalhaut.  When I'm not doing assaults or trying to figure out how to kill NMs, I'm trying to master GEO.

Braego has been back since the spring 'free two weeks' campaign.  Sligs has been back for the past month or so.  Unfortunately, my playtime doesn't really overlap with either of them.  Braego logs off before I can log on and I end up going to bed before Sligs logs in.

There's always the weekend, I guess!

I've capped xp/merits on all jobs.  I also leveled Trutaru up to 99 on RDM and SMN.  I'm thinking I might take Vellaide to 99 soon, too (just as soon as I convince myself that it is worth it to go through LB60). 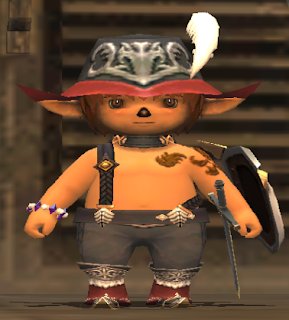