Back in the Game
I took advantage of SE's free trial for returning adventurers and spent some time trying to get back into the swing of things.  I was hoping to be able to access Adoulin areas, but SE support was never able to get me the seekers trial content IDs that I needed.  :(

I was really lacking in the gear department, so I decided that the best course of action was to make some money.  Potestas bomblets were still selling for ~1.5 mil, so I geared up DNC and headed to Upper Deklfut's Tower.  After ~4 hours I got the bomblet.

Since I didn't have any friends playing I went back up for another.  This time, it was a bit more elusive.  I was able to completely cap merits while farming.  It was about 20 hours this time before I got the bomblet.  I also nabbed a couple of automaton attachments that sold relatively quickly and for a nice chunk of gil.  I was tired of killing gigas so I changed it up a bit and headed out to U.Range to try my luck at a dark spirit pact.

The version update provided warps between homepoints, which is super convenient and makes it so much easier to get stuff done, or to just get started doing the things that need to be done.  I spent a bit of time running around re-registering home point crystals for ease of access and also started collecting proto-waypoints for those harder-to-reach locales.  One of the locations took me back to Deklfut's Tower, so I killed a couple gigas and got another bomblet to help the ol' bank account.

Along with a couple of extra drops (d.cloth from gold box in Abyssea-Konschtat, a couple of malboro fibers when using up some of Ia's seals) I was able to make a little over 6 million gil in ~1 week.  Also, with the addition of the Copper AMAN vouchers and rewards for one-time Records of Eminence objectives, I've been able to make quite a bit of gil by selling plutons.  I've sold ~20 plutons at 200-250k gil each, so an additional 4-5 million gil.  Not a lot by most standards nowadays, but enough for me to start re-gearing some of my jobs and make me feel less gimp.

Records of Eminence
After seeing the Eminent weapons, the first one I picked up was the dagger since I do all of my soloing and farming on DNC.  As it turned out DNC couldn't equip the dagger (WTF SE?!), so I picked up the H2H and G.Axe.  I tried out the H2H in Abyssea-Grauberg on pots using the brand new (to me) Gnarled Horn atma.  I was able to knock out multiple 500+ damage trials and completed the 1k damage trial in very short order.

Next I tried out the G.Axe.  This thing is just incredible.  Against most EP mobs, the minimum damage is 500+, so I'm completing a RoE trial every 200 swings of my axe (or less, given the damage on multi-hit WS).  It is nice that Easy Prey finally feels like easy prey!

I summoned Kupipi, Excenmille, and Nanaa Mihgo and laid waste to the Mamool Ja Staging Point.  I can completely clear the area in time for repops.  Defeating multiple enemies, dealing 500+ damage, wind crystals, and the occasional experience points timed objective make this place a gold mine for farming sparks and gaining XP.

Trust
Trust NPCs have got to be the biggest boost to this game since Abyssea Atmas were introduced.  I unlocked all of the Trust NPCs as soon as I could.  Now, I can solo on jobs other than DNC, WHM, or RDM and not have to worry about down time.  The NPCs know their roles and are very powerful.  I almost prefer to have a party of NPCs and my fellow over other players!  Now, with Shantotto and Ajido-Marujido there is so much damage potential that it feels like the entire world is open for exploration and soloing!

New Shinies
The potential rewards for the current login campaign include upgrade items for Empyrean +2 armor.  Since I don't think I could quickly farm mobs for my own items, I've been turning my login points into +2 armor.  By the time this login campaign is completed, I will have upgraded WHM head, legs, BLM body, hat, hands, legs, BRD head, legs, and SCH body to +2!  I also spent some time farming gold boxes in Abyssea-Konschtat and finally got a Wivre Hairpin augmented with refresh.  The only pieces that I need to complete my idle refresh gear are the serpentes cuffs/boots.

I also upgraded some AF armor: WHM and DNC bodies, BRD feet.  Some of these pieces are very nice macro pieces, so I'll need a lot of sparks to upgrade them all.

Mugido
During my farming, I made sure to have Mugido out and he as reaped the benefits.  He was capped at 75 when I reactivated, so I made sure to do his limit break(s) and have taken him all the way to 91 so far.  His normal melee attacks are closing in on 200 damage (on EP mobs) and his weaponskills can break 1500.  He's come a long way from when we first started adventuring together!

More to Come
I'm not sure when the free trial will be over as it was originally supposed to end on Dec. 23rd, but I'm hoping to keep playing indefinitely.  There is still a lot more that I'd like to accomplish.  I'm just 300 pet kills away from buying (geodes/titanites) the rest of my Pet -dmg axes.  I'd like to get back into doing dynamis regularly.  I've got a lot more sparks to earn to upgrade AF armor.  I would like to take THF and NIN to 99.  If I ever get the Seekers of Adoulin expansion, I'd like to also take GEO and RUN to cap.  Almost all that I want to do, I can easily accomplish solo thanks to the Trust NPCs.  We'll see what happens! 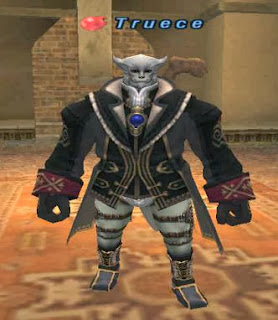 Posted by Truece at 3:11 PM No comments:

I did okay for almost a year and a half...

In the spring of 2012 I decided to stop playing.  I didn't want to go so far as to drop all of my RA/EX stuff and delete my characters, but I did cancel my service.  To discourage myself from wanting to come back, I sold just about everything that I could and distributed almost all of my gil and semi-valuable items to my friends.

When my wife and I first started playing the game, a stranger gave 100k gil to her 'to help a newbie out' (gogo mithra?). I decided that I wanted to do something similar.

I also remember the good ol' days of running around various zones and PLing random people.

I set out in Windy and the Sarutabarutas looking for a noob. I wandered through both zones without finding a single person. Next, I hit up the dunes, thinking of the old days where I'd spend my time just PLing random groups there for funsies. I was able to find a level 30 WAR without a subjob, so I offered to help them get their subjob items and gave them 200k when they got their last item. I didn't feel like going to babysit an alliance in Gusgen, so I kept looking in the dunes. Eventually I found a trio that seemed grateful for my assistance. I spent an hour doing the healing and gave them each 150k with instructions to "pay it forward". Made me feel good. Makes me wish I would have spent more time helping other people instead of waiting in my mog house for friends/LS mates to log on.

I played the game for more than 7 years and spent ~$2500 on it. I was logged in on my main for more than 717 days (quite a bit of overnight/AFK time in there). I felt that it was time to move on.

I never felt that I was rich. I always had reasonable gear for my jobs, usually the best NQ stuff from the AH. By the time that I cleaned out my mules, and sold most of my stuff for 1/2 price in Port Jeuno, I was able to give away almost 30 mil gil!

But now, I just can't seem to shake the urge to return to the game.  I tried to get excited about FFXIV: ARR but it just didn't work.  For some reason, the two new jobs really seemed to pique my interest.  I spent probably 20 hours over the weekend watching videos of people playing FFXI as GEO.  One dude had a 12-hour stream of him doing a marathon of GEO from 46-99.  I watched almost half of that stream (before technical issues on his website stopped me), even when he was leeching in a FC PT (not even keying) and was just spamming GEO spells in an attempt to skill up.

I know that I don't have many friends who still play the game and I know that I'm very far behind when it comes to new content and gear, but I still want to play again.  I'd like to think that I'd take a much more casual approach this time and not get so stressed about things going wrong.

I've got a beta invite to Elder Scrolls Online which I hope to play with for a bit.  Maybe that will satisfy my MMO cravings.

I hope it does, anyways.  Time will tell!