I got rid of the last of Ia's things and officially cancelled her account (again).  I really think that this is it for her character.  She has such little interest in playing FFXI compared to other games.

Over the weekend I spent some time doing dynamis with Wack.  We hit Sandy (MNK + DNC) to collect touches that he needed for his Melee Gloves +2. That zone is pretty tight and each TE is guarded by a PLD and RDM.  Well, we couldn't seem to get the TE w/o adding it's guards, and Chainspell really gave us some problems.  The 4th TE easily took us 30 mins to take out since we kept on getting nuked to death :(.  It should be mentioned that his MNK was only 91 at the time.  Eventually we were able to get all the TEs and do a bit of farming.  We didn't do great currency-wise or forgotten touch-wise, but we learned that we need to just focus on getting the TE out of the way before worrying about adds.

The following night we went again, this time as NIN + RDM.  Having Protect/Shell and sleeps really helped a lot.  We camped over by the manor and had a pretty steady stream of mobs coming in.  Once again, we had a pretty meh run when it came to drops.  Despite the fact that I was almost constantly casting one spell or another, I really felt kind of useless/helpless.  It was nice to be able to wear the +2 hat and have 5mp/tic refresh in my idle gear, but I just didn't feel like I brought enough to the table.  I had considered going /DNC to melee, but I'm glad I didn't.  My gear/macros/everything is not where I want it to be for RDM, so I generally don't really look forward to playing it.  Plus, and I've said this before, I hate being a sole healer on RDM.  It just doesn't have the MP conservation tools that WHM(/SCH) or SCH have, even when I do go RDM/SCH.

The night after that we decided to drag Lun along for funsies.  Just as we were about to enter, Skadan showed up wanting to tag along.  After we got inside (and got all of our TEs) Lun asked if Genesisblue could join.  We ended up with SCH (me) NIN (Wack) THF (Skadan) BST (Lun) MNK (Gen).  We really kind of cleaned house.  Wack got the last of the forgotten touches that he needed and decided to not take his split of the currency, so everyone else ended up with 23 or 24 currency.  I also had 3 touches sort to me, for an extra 120k.

We were going to do Nyzul after, but Lun went AFK for food and it was getting late, so Wack and I hit Horlais Peak to do the orc KCNM 'Last Orc-Shunned Hero'.  This is a pretty straightforward and easy fight, even as a duo.  We both managed to get the greaves, which is a nice 1.5mil.

On Sunday we finally managed to do some Nyzul Isle.  First we did a climb for Lun's runic key.  We went from 65-70 as NIN DNC SCH very easily.  For the 2nd run, instead of climbing some more, they decided to do the Uncharted nyzul (geared towards 99s).  I don't understand why they wanted to do this lowman.  Regular Nyzul is understandable as it was geared towards level 75 characters.  Taking 3 99s in there is a walk in the park.  But the uncharted version and lowman just seems kinda pointless.  We managed to clear a total of 3 floors (getting to floor 12) before we exited due to lack of time.  I don't want to do uncharted again unless we've got a bit more firepower and support going along. At least 4 people!

We got two real ??? items from our run: Serket Ring from Serket, and Bravo's Subligar from Oqdan(sp).

After Nyzul, Wack and I did another dynamis, this time opting for Xarc for some forgotten hopes.  There was a THF there who wanted to get some exp on his +2 relic trial, so he joined up with us.  We managed to take out all 5 TEs in about 5 minutes, then spent the rest of the night camping in the middle of the map, laying waste to everything around us. The dude's TH was working overtime and we ended up walking out with almost 200 currency.  Wack got 8 hopes to add to his collection (bringing him to a total of 19) and I managed to get the DNC relic that I had been wanting.  When all my currency sells, my split will be ~575k.

With all the dynamis that we've been doing and the lucky drops on the KCNM, I'm currently sitting on the most gil that I've ever had.  It's probably not a lot compared to what others have, but I'm very pleased and would like to keep working on the ol' bank roll to see if I can break the 10mil mark.

So, I had a chance to take both SCH and RDM to dynamis and I have to say that SCH just beats the pants off of RDM.  It has so many more useful spells to bring to the table, and much superior MP recovery/conservation tools.  I like the gear that I have for RDM, but SCH is way more enjoyable for me to play, especially in a solo-healer (or solo mage in general) role. The only thing that RDM had that I wished I had on SCH was addle.  It made fights against BLM/BRD/BST pets so much easier.

This week, I expect to do more dynamis, maybe some more Nyzul Isle to get lun's disc up, and maybe work toward getting more Cards of Ardor for my +2 SCH/WHM/MNK bodies.

Here are a couple of funny stagger poses from the Xarc run: 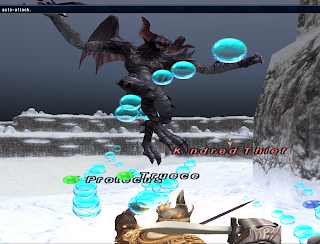 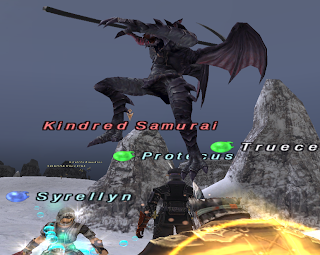